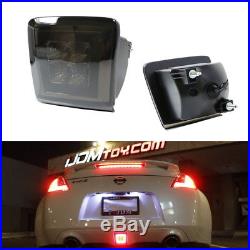 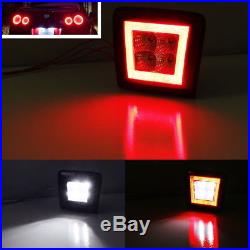 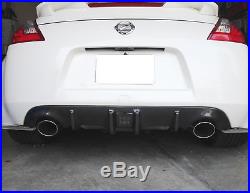 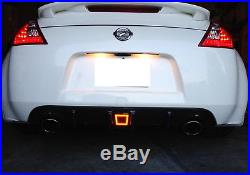 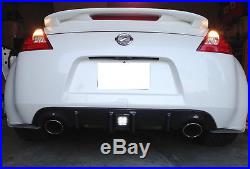 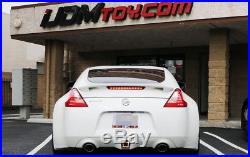 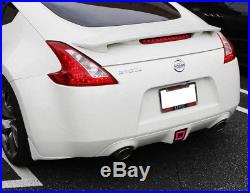 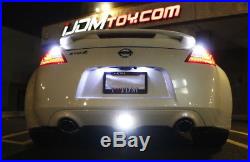 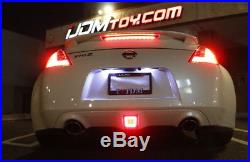 Smoked Lens LED Rear Fog Light, Brake and Backup Reverse For 2009-up Nissan 370Z. If you're still blacking out the stock rear reflector or drilling holes in your bumper, we have a solution for you!

Introducing iJDMTOY's all new Nissan 370Z LED rear fog light/backup light that converts the US version's lightless center bumper reflector into a tail light, brake light, and reverse light all in one. This dark smoked lens LED assembly is compatible with 2009 and up 370Z and is inspired by the 2015 GTR where the LED Tail light and brake light is designed so that you don't actually see each individual LED. Rather, you get a fluid, continuous output. There are 4 pieces of Samsung LED in the center function as reverse lights and a surrounding red LED border for the tail light and brake light. This is the latest LED technology you will see on many new cars for their tail lamp designs, which gives your 370Z a nice JDM Fairlady Z look, just brighter and better. Powered by 8 pieces high power SAMSUNG LED lights. Replace the light-less rear center bumper reflector to LED taillight/backup light.

Nissan 370Z LED 4th Brake, Rear Fog Light, Reverse Lamp (youtu. IJDMTOY (MotoringMax) was founded in 2004 and has since become one of the largest automotive LED lighting retailers in the United States. We are located in Los Angeles, California and carry the most complete LED replacements for all cars, SUVs, and trucks.